You are here: Home1 / Blog2 / What is Vegan Cannabis? The All-You-Need-to-Know [Complete guide]

Vegans must constantly inspect the labels of the food and drink they consume, checking for any animal products, so they know whether or not it is suitable for their diet. However, people often forget to consider the things that they smoke. So, is weed vegan friendly? Let’s take a closer look at the details. 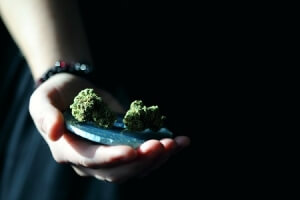 Cannabis is a plant, so surely that means it cannot contain any animal products, right? Well, unfortunately, it turns out that the answer isn’t exactly a straightforward one.

Sadly, most of the recommended fertilizers used during the cultivation phase of growing the plant contain nutrients that are derived from animals. So while you may not be smoking any animal parts directly, the product that you are inhaling may have grown thanks to the aid of animal derivatives found in fertilizers. Technically, this means that weed grown in such a manner is not 100% cruelty-free. Unfortunately, it’s extremely difficult to find out exactly what fertilizer growers have used, especially if you buy your weed from the marijuana dispensary.

What is a Veganic Cannabis?

So what is a vegan weed, and how can we grow it? Well, first things first, we need to stop any use of fertilizers that use animal products in the growing and cultivation process. However, this is not as simple as it sounds.

The vast majority of the commonly used fertilizers contain a wide range of animal sources in them, such as pig and chicken blood, worms, bone meal, and varying types of manures. There is a reason why all of the highly recommended fertilizers use these products… they work!

It turns out it can be pretty tricky to source a fertilizer that does not contain any of these ingredients while still doing as good of a job but don’t worry, it is possible. 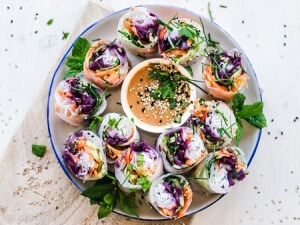 If you prefer to eat your cannabis in tasty vegan edibles, you have to consider what you’re consuming. Not only do you have to make sure that the cannabis was grown using the veganic process, but you check that all of the ingredients that go into the edible are vegan friendly.

If you make your own edibles, then you should opt to make your own cannabutter using vegan coconut oil rather than regular butter. This is a great way to make your own weed cookies, brownies, and other tasty edibles while ensuring they are 100% vegan. Be aware that the gummy bear edibles that you can buy in the marijuana dispensary are not vegan friendly as they contain gelatin.

The Veganic Method for Cannabis

Veganiscs simply refer to organic growing, cultivating, and producing food and other crops with minimal exploitation or harm done to animals in the process. It is the combining of both vegan and organic philosophies in one process.

With that being said, cannabis farmers, just like any other farmers, need healthy soil in order to produce a healthy plant. So how do veganic farmers approach this? Let’s take a look at the process.

The most crucial aspect of growing a cannabis plant is ensuring that it has access to all of the nutrients it needs to thrive and grow healthily. Fortunately, there are plenty of feeding systems available that do not require an outlay on super expensive nutrients.

One of the most popular veganic methods for this is to use a compost tea, which is made by soaking compost in aerated water. This produces an extremely rich fertilizer full of microbes that help the cannabis plant grow as healthily as possible.

In short, yes. Vegan weed is said to be a lot cleaner than non-veganic weed as it has much less residue when smoking. People who smoke vegan weed for the first time often comment on how much smoother it is compared to regular weed. This is due to the reduction of noxious fumes that can make smokers cough from time to time. In fact, vegan strains of cannabis are winning awards for their delicious taste and prominent flavors.

So there you have it. As you can now tell, most weed is not vegan, as it most likely has been grown using a non-veganic method. While the veganic strains are often harder to come by, it’s worth the effort to know that your weed is 100% cruelty-free. Plus, it smokes and tastes better too!

If all else fails and you can’t find a vegan strain, maybe it’s time to grow your own or use this as a time to take a marijuana detox.