The market offers a huge range of cannabis concentrates. They range from shatter and isolate to resin and rosin. It’s not easy to distinguish different extracts, and live rosin and resin often cause confusion. This guide focuses on the specifics and differences between these two concentrates. Apart from only a single letter distinction in writing them, here is what you should know about live resin vs rosin!

What Is Live Resin?

Before we proceed to live resin v.s. rosin comparison, let’s cover the basics of each extract. We’ll begin with a few quick facts about the live resin:

Live resin is a cannabis extract or concentrate drawn from a fresh cannabis flower. You grab an uncured marijuana flower and put it at extremely low temperatures. They should go below the freezing point to ensure the plant freezes automatically. It’s a vital step to ensure that you keep a maximum of the herb’s active compounds, including cannabinoids and terpenes.

You need to use chemicals to extract the juicer from the flower. That’s why you need a laboratory with the necessary equipment. The common solvents used are propane hash oil (PHO) and butane hash oil (BHO). The temperature remains low to ensure the flower remains frozen during the process.

Once you finish the extraction, you proceed to distillation. Distillation serves to remove the solvent from the plant. After completing this step, you can pack the concentrate and get it ready for distribution.

If you are making live resin, you don’t go through the curing and drying phases. That’s because the flower doesn’t keep chlorophyll and moisture during the drying stage. Cannabinoids and terpenes go through heat exposure, which can reduce their quantity in the herb.

You can get resin out of a dry flower, too. However, you will notice significant differences in flavor and taste. Additionally, they won’t have the same active compound structure.

The highest quality of resin comes from sugar leaves and fresh flower buds. You exclude stems and fan leaves from the processing.

What Is Live Rosin?

Here is a quick overview of what to expect from live rosin:

You’ll recognize rosin for its distinctive color. Unlike other types of concentrates, it’s amber or even white. Growers use a relatively new method to extract rosin from cannabis plants. Although it’s recent, it’s not complex. That’s because there’s no need for hydrocarbon extraction. You won’t find any chemicals or solvents used in this entire process. It’s why rosin attracts user attention and becomes more popular every day.

Unlike resin, it’s impossible to extract rosin by freezing a fresh plant. That’s because fresh cannabis is moist. You use heat during resin production, and that would destroy terpenes and cannabinoids during the process.

Live rosin requires using an ice-water hash. You might also know it as bubble hash. The idea is to freeze the plant while it’s fresh by putting it in extremely low-temperature conditions. Once you do that, you give it a bath in the mixture of ice and water. The idea is to get the trichomes into the water. You grab those trichomes and filter them through fine bags. This removes any plant material residue left.

Finally, you collect trichomes and use a freeze dryer to put them in a bubble hash. It’s essential to do the filtration thoroughly. Otherwise, you will burn the herb material instead of melting it.

The remaining step includes using a rosin press. It’s special equipment that applies low pressure and heat to create live rosin. The result is a concentrate with a decent amount of terpenes and cannabinoids. 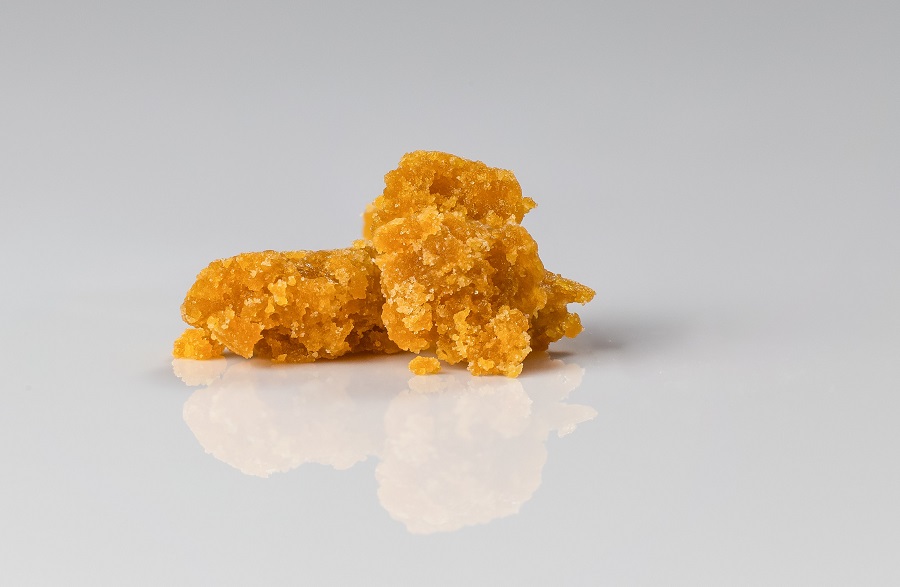 Now that we know the basics of each extract, it’s time for a live resin v.s. live rosin showdown. Here is a comparison of the significant differences of these compounds:

The general rule is that resin has more THC than rosin, but it can depend on the plant.

If you want to extract the live resin, you’ll need a solvent. It’s usually carbon dioxide or ethanol. That’s why you should confirm its quality before acquiring it. Rosin doesn’t require solvents for the extraction, so you can rest assured it doesn’t contain chemicals.

Another difference between resin and rosin is that it’s more difficult to produce the former. The process requires more effort and skills due to its complexity. It’s easier and cheaper to make rosin.

Live resin contains THCA, and you shouldn’t put it in a cup of coffee or consume it in edibles. You can, but THCA doesn’t have the same effect as THC, so you won’t experience the thrill. The manufacturing process of making rosin converts THCA to THC. That makes it suitable for edibles. They will provide the same effect as when dabbing or vaping marijuana.

Live rosin is white or amber, and it has a noticeably lighter color than resin. As for resin, it has a similar color to honey or nectar.
Apart from learning about different extracts, you need to distinguish live from regular resins and rosins. Live extracts come from uncured, fresh, or “raw” flowers. It’s why they have the “live” prefix.

But if you come across something only described as rosin or resin, it’s probably from a dry plant. Other sources include kief and hash. The structure of the two types is different. You’ll find live extracts taste better because they contain more terpenes.

Which Is Better – Live Rosin or Resin?

These are both high-quality cannabis extracts. The resin might be more potent, but it has a more complex manufacturing process. Rosin often smells and tastes great. And depending on the unit, it can also contain a high THC percentage. It all comes to your preference, and it might be best to try both. It’s the best way to see which option delivers the benefits you are expecting!

How Many Strains of Marijuana Are There?

CBD Skincare: Everything You Need to Know
Scroll to top