You are here: Home1 / Blog2 / How to Smoke Wax Using Different Smoking Methods

Whether just entering the world of marijuana and all about it, or a long-time experienced enthusiast of the cannabis plant and its derivatives, talking about smoking wax will never be outdated. Even if you know all the ins and outs, we will still cover some basics just in case, so read on to find out more about what exactly this wax is and how to smoke marijuana wax. And of course, additional useful tips and info to make the best out of some suggested ways to consume marijuana.

What is Marijuana Wax?

Alright, to start this off, simply put, the marijuana wax is the compressed concentrate of the gooey, sticky, darkish oil of the marijuana plant, also known as hash oil, whereas the wax is known as a dab. You may know by now, the thing that resembles tree sap, or just very dark and thick honey, and when pressed well, you get the wax. The marijuana wax is as we have described it – a thick concentrate of cannabis, a resin oil of said plant that can be consumed in various ways – whether ingested, vaporized, as a solvent, or smoked (yes, if you instantly want to know how to smoke wax, we’ll cover this below), and it has an amber, golden color.

How to Make Marijuana Wax? 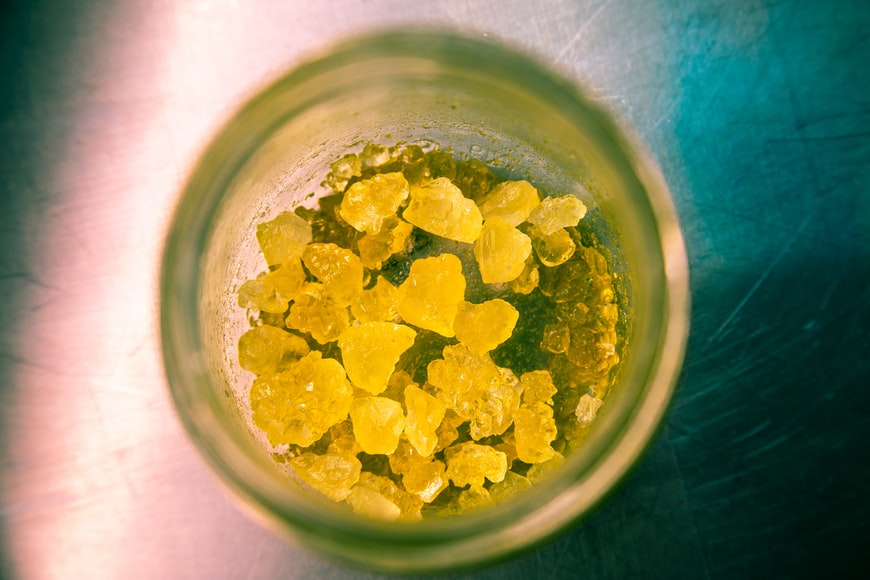 If you have some access to marijuana plants or intend to, why not utilize them to make wax itself? Before we start clarifying how to smoke wax, first let’s jog the memory or learn how to make it, and then we can move on to answer how to use cannabis wax in detail.
And, this method that follows is basically simple and easily done, so also get a thin blade (razor type), a heating object (a flat iron is best), kitchen mittens (oven mittens), baking paper too and that is all. The procedure is as follows: First, let the iron get heated to a high temperature of at least 150 C or above. While this heats up, try to chunk up the marijuana into a few little pieces or rolls, but press them with your hand and make them as flat as possible. Take the baking paper sheet, folded precisely in the middle, and put these marijuana buds where the paper folds. Mittens on, buds on the paper, now it’s time to ‘iron’ it all out for a few seconds, good pressure over it too. If you are new to this, it is best to press one chunk-piece after another and see how it goes, and finish up with all of them.
You might also notice there will be some residue like a ‘leftover’ bud, but do not throw this away – here is where the ‘blade’ thing helps you scoop this away (such leftovers can soak in coconut or olive oil to get…marijuana oil!)

How to Smoke Marijuana Wax?

Time to talk more on smoking wax now. Yes, there are different ways to smoke wax and you’ll get informed on them shortly. Beginning with the essentials, we cannot make the complete guide without the needed equipment, so of course, you certainly ask yourself what do you need to smoke wax and what to purchase/obtain? Or what do you smoke wax with? You are in the right section because this is the main part where the action starts to happen, the smoking itself. It can seem confusing at first when you think of the methods and how to smoke wax initially but know that common ways are the dab rig, nectar collector, vaporizer, and joint or a bowl.

How to Smoke Cannabis Wax with Dab Rig? This is probably the most common and best way to smoke wax. It is a process of vaporizing the concentrate on top of a hot surface, heating it, and inhaling the smoke, and this always comes up among the top choices out of all the ways to smoke wax. However, this method is not ideal for novices into smoking wax, so give it time.
For this, you need a dab rig, a dab nail of quartz, titanium, or ceramic (which holds the wax), a carb cap (ideal for the airflow, but not obligatory), a dabber (applicator for the wax into the nail), a torch (small kitchen one), and the wax.
Next, heat the nail part with the torch and then put the torch aside. The nail will cool slightly (in less than a minute), and now you just place the dab on top of the nail (your dabber part is helpful for this). Inhale during this step. For better airflow, try to use a cap for the dab as you are almost done smoking and exhaling.

How to Smoke Cannabis Wax with a Nectar Collector?

If you still wonder how you use THC (Tetrahydrocannabinol) wax, read on because there are other ways to smoke wax, for example with a nectar collector. This is also fairly simple, as follows:

As you see, section by section so far, we clarify how to smoke wax in more than one way, as it follows below too, while we are covering the methods.

How to Take Marijuana Wax with Vaporizer?

The vaporizer is also known as the dab pen, a small, practical device running on a battery.

If you want to know how to use cannabis wax to make a joint, this section explains smoking wax from another angle. The wax joint is a regular cigarette-shape joint as you know it, except it has the wax into it, over it, or around it, and is most suitable for those handling a strong high!

Is this the best way to smoke wax? Depends on your preferences, but if you dislike the joint form, similarly, you can also take the wax with a bowl (bong). Even though bowls are used mainly for dry leaves or similar, you can try with wax too.
For this, you need a lighter, larger bowl (not the classic smaller ones), the wax, and some marijuana florets. Toss these florets to the bowl, and place the wax on top of this floret ‘pile’. It should be equally spread over them. Light up the buds with the lighter until you see wax melts. Careful, it must not caramelize or fully boil. Inhale and enjoy!

Choosing the Right Tool to Take a Wax?

By now you are probably still buzzing with information about all the different ways to smoke wax, but none of them are too complex and all things take time to become simple. To know or choose the best tool, but you can smoke the wax with a dab rig, nectar collector, vaporizer, as a joint, or with a bowl.
When in doubt, just visit a marijuana dispensary and see on-site the rich choice of all-things marijuana, and accessories too. Just respect the marijuana dispensary etiquette and get what you need by politely asking about the types and uses of equipment for sale, marijuana types to go with them, the right amounts to buy cannabis, and so on.

In conclusion, we covered the essential basics of marijuana wax, how it looks, what is specific about it, how to make it, and how it can be used to its potential. Even more importantly, we hope you learned about the consummation too, or how to smoke wax – choose between dab rigs, nectar collectors, vaporizers, rolled joints, or a bowl.
Just safely and relaxed follow the instructions of preparing and using the wax, and enjoy!

How to Buy Marijuana at a Dispensary [Complete Guide]

The Benefits of CBD Massage Therapy & How It Works?
Scroll to top